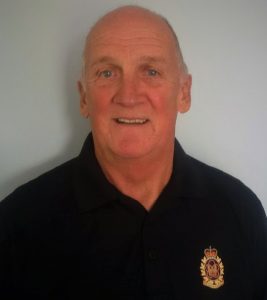 Ken Doucette, formerly of Trenton, NS, enrolled in the Canadian Armed Forces/RCAF in April 1969. Upon completion of basic training at CFB Cornwallis, he attended the Fire and Rescue Academy at CFB Borden, and upon graduation he was posted to CFB Toronto (Downsview ON) and then to HMCS Saguenay, Halifax, NS.

In 1991, he was promoted to the rank of Chief Warrant Officer and transferred to National Defence Headquarters in Ottawa as Career Manager for Physical Education & Training Instructors as well as for CF Musicians.

In 1994, he was appointed Wing/Base Chief Warrant Officer at 9 Wing/CFB Gander, NF, and in 1995, he was appointed Physical Education Branch Chief Warrant Officer, and transferred back in 1996 to Ottawa. He was a key member of the formation implementation team for the new Personnel Support Program Plan which lead to the creation of the now very successful Canadian Forces Moral & Welfare Services. In 1997, Chief Warrant Officer Doucette retired from the Canadian Forces and was hired as CF National Sports Manager. In 2000, Mr Doucette accepted a position in Halifax as Maritime Forces Atlantic PSP Senior Sponsorship Manager and later was promoted to the position of Director of Marlant PSP Corporate Services. He  also acted as National Sponsorship Manager and assisted with the organization and setup of Corporate Sponsorship Cells and Family Appreciation Days at CFSU(O) Ottawa and CFB Kingston.  He retired in April, 2019 as Senior Sponsorship Specialist at CFB Kingston.

Ken is married to his wife Denise for 48 years. They have one son Paul, who is a LCol with the RCAF Public Affairs Branch. Paul and his wife Alanna have blessed Ken & Denise with 2 beautiful grandchildren, Sophie and Charlie.

Ken Retired in April, 2019 after 50 years of dedicated service to this great nation and to the Canadian Armed Forces.

SearchPostsLoginCart
Thank you from the Invictus Games
A message from one of our partners: Support Our Troops
Fay shares peace and magic in Natasha’s Wood
Message from a Veteran’s spouse
Introduction by Sophia Leong, Director of Telfer Executive MBA, of guest speaker Fay Maddison, and the Natasha’s Wood Foundation
Congratulations Sarah Fowler!!!